C.A. Hartnell is an award-winning author, entrepreneur, and philanthropist who was born in Chicago, Illinois and is a true midwestern girl at heart. Her family moved Carol from Chicago to Southern California on Route 66 in the 1950s. She now resides in Las Vegas, Nevada with her husband of many years. She is blessed with a wonderful family and fabulous friends.
Hartnell’s faith and spirit of adventure grew under the loving, courageous, and inspirational influence of her family members. An enchanted childhood during the 1950s in El Monte, California, became the inspiration for her children’s book series, The 1950s Adventures of Pete and Carol Ann. Take a blast to the past in her books Scary Spring, Sinister Summer, Ferocious Fall, and Wild Winter.  Middle-grade readers and adults are propelled into exciting adventures when teens drove cool cars, kids went to drive-in movies, and Rock ‘n’ Roll tunes blasted out of every transistor radio. Captivating characters and dynamic plots have earned these wholesome chapter books coveted literary awards: Mom’s Choice Silver, Literary Classics Gold, and Moonbeam Bronze.

Finally, when Carol isn’t working tirelessly for causes close to her heart that help kids and adults with disabilities and illnesses, she loves to read, write, travel, bake, pursue adventure and participate in local and national book festivals.

Sir Norman Bishop Hartnell,  (12 June 1901 – 8 June 1979) was a leading British fashion designer, best known for his work for the ladies of the Royal Family. Hartnell gained the Royal Warrant as Dressmaker to Queen Elizabeth in 1940. He was her personal designer from her childhood until his death.

John Hartnell (c. 1820 or 1821 – 4 January 1846) was an English seaman who took part in Sir John Franklin’s Northwest Passage expedition and was one of its first casualties, dying of suspected zinc deficiency and malnourishment during the expedition’s first year.
Learn More

William Henry Hartnell (8 January 1908 – 23 April 1975) was an English actor. Hartnell played the first incarnation of the Doctor in Doctor Who, from 1963 to 1966. He was also well known for his role as Sergeant Grimshaw, the title character of the first Carry On film, Carry On Sergeant in 1958.
Learn More

First Class Salon Steward not the Titanic. He didn’t sink with the ship! Lived to tell his story. When he signed-on to the Titanic, on 4 April 1912, Hartnell gave his address as 25 Harcourt Road, Southampton.
Learn More

Founded Hartnell College in Salinas, CA. He married a wealthy land-owner’s daughter and they had 19 children.

John Hartnell, of the Franklin Expedition, and his mummified remains have become the face of the expedition.

First Class Salon Steward on the Titanic who didn't sink with the ship but lived to tell his story.

Sir Norman Bishop Hartnell, KCVO (12 June 1901 – 8 June 1979) was a leading British fashion designer, best known for his work for the ladies of the Royal Family.

The Polio Generation: Built on Toughness 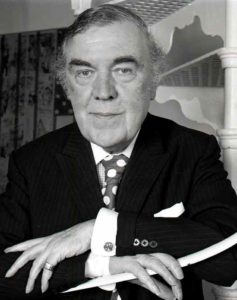 Hartnell is famous as the man who made London a viable twentieth century fashion centre during the inter-war years. Born to an upwardly mobile family in Streatham, in southwest London, his parents were then publicans and owners of the Crown & Sceptre, at the top of Streatham Hill. Educated at Mill Hill School, Hartnell became an undergraduate at Magdalene College, Cambridge and read Modern Languages. His main interest lay in performing, and designing productions for the university Footlights and he was noticed by the London press as the designer of a Footlights production which transferred to Daly’s Theatre, London. He then worked unsuccessfully for two London designers, including the celebrated Lucile, whom he sued for damages when several of his drawings appeared unattributed in her weekly fashion column in the London Daily Sketch.[2] In 1923 he opened his own business at 10 Bruton Street, Mayfair, with the financial help of his father and first business colleague, his sister Phyllis. The Doctor Who actor William Hartnell was his second cousin.

Thanks to his Cambridge connections, Hartnell acquired a clientele of débutantes and their mothers intent on fashionable originality in dress design for a busy social life centred on the London Season. and was considered by some to be a good London alternative to Parisian or older London dress houses. The London press seized on the novelty of his youth and gender. Although expressing the spirit of the Bright Young Things and Flappers, his designs overlaid the harder silhouettes with a fluid romanticism in detail and construction. 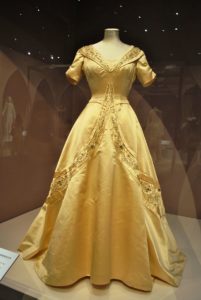 This was most evident in Hartnell’s predilection for evening and bridal gowns, gowns for court presentations, and afternoon gowns for guests at society weddings. Hartnell’s success ensured international press coverage and a flourishing trade with those no longer content with ‘safe’ London clothes derived from Parisian designs. Hartnell became popular with the younger stars of stage and screen, and went on to dress such leading ladies as Gladys Cooper, Elsie Randolph, Gertrude Lawrence (also a client of Edward Molyneux), Jessie Matthews, Merle Oberon, Evelyn Laye and Anna Neagle. Even top French stars Alice Delysia and Mistinguett were impressed by the young Englishman’s genius.

Alarmed by the lack of sales, Phyllis insisted that Norman cease his pre-occupation with the design of evening clothes and he create practical day clothes. He achieved a subtlety and ingenuity with British woollens, previously scarcely imagined in London dressmaking, yet already successfully demonstrated in Paris by Coco Chanel, who showed a keen interest in his 1927 and 1929 collections when shown in Paris. Hartnell successfully emulated his British predecessor and hero Charles Frederick Worth by taking his designs to the heart of world fashion. Hartnell specialised in expensive and often lavish embroidery as an integral part of his most expensive clothes, creating the luxurious and exclusive effect which justified the high prices. They were also created to deflect the ready-to wear copyists. The Hartnell in-house embroidery workroom was the largest in London couture and continued until his death, also producing the embroidered Christmas cards for clients and press during quiet August days, a practical form of publicity at which Hartnell was always adept. The originality and intricacy of Hartnell embroideries were frequently described in the press, especially in reports of the original wedding dresses he designed for socially prominent young women during the 1920s and 1930s, a natural extension of his designs for them as débutantes, when many wore his innovative evening dresses and day clothes. 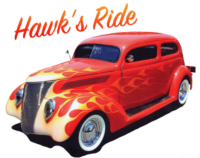 Hawk’s Ride is a 1937 Ford Slantback with original steel frame and body. It has a 3″ chopped top. The engine is a 350 GM crate motor with a Turbo 350 Transmission, a 10 bolt GM Rear with air ride and a Holly 650 Carburetor.  Chicago girl gone West on Route 66! 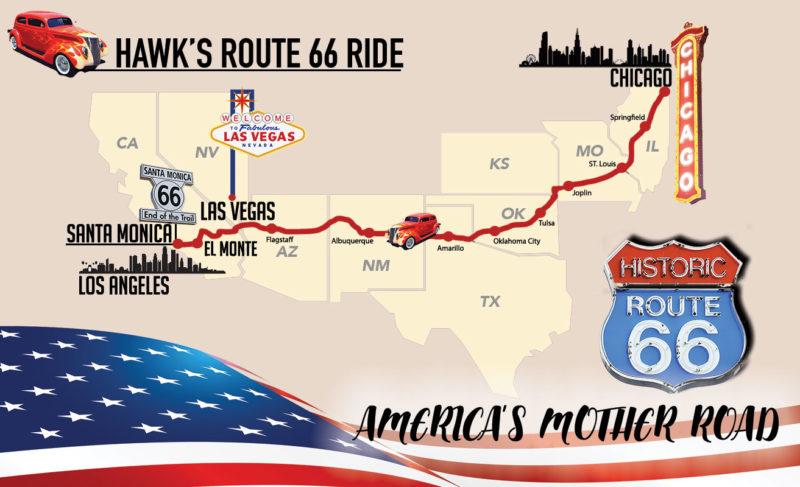