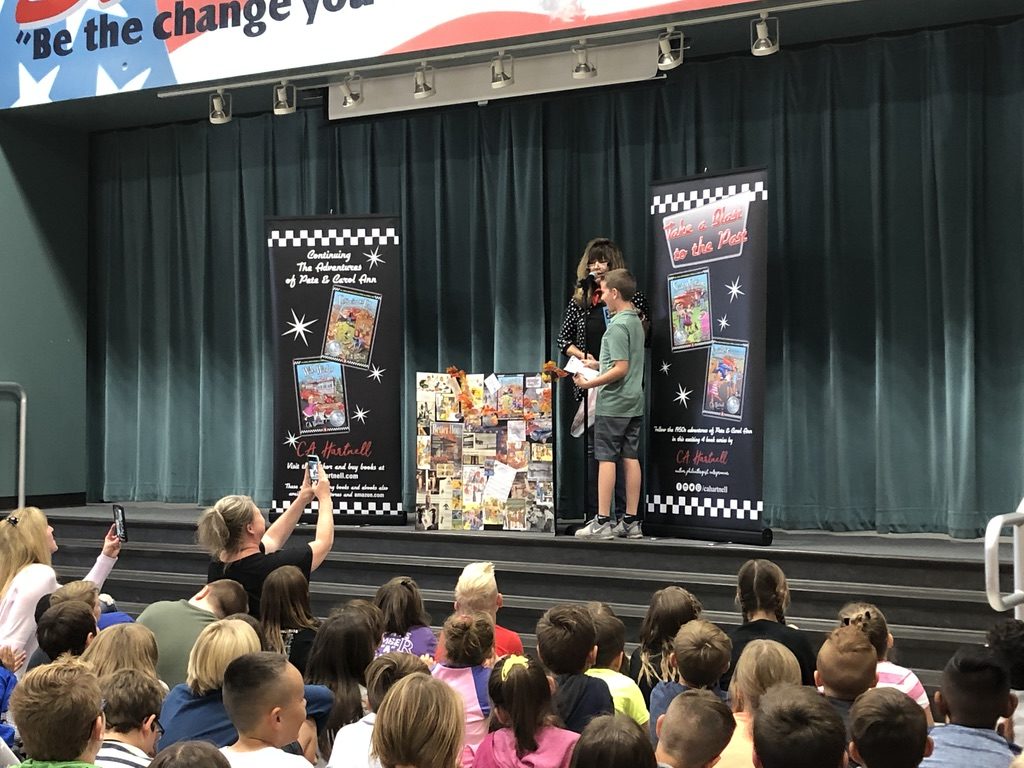 C.A. Hartnell announced the winners of her “Adventurous Authors” short story contest partnership with the Clark County School District. Thank you to everyone who participated and to the top three schools with the most submissions:

It was that time of year again, our annual summer trip to my uncle and aunt’s beach house in California. Though this time was different, Dad planned for us to go ocean kayaking! Anticipation filled me as I marked off the days on my calendar!

We rented a kayak at Kayak and Bike Tours. We were each fitted with rather stinky lifejackets and helmets to match. Safety first! I had to plug my nose. Dad took the paddle and was advised to take the kayak’s back seat, otherwise his massive weight would fling me like a sling shot from the back if we hit a wave. Of course, I didn’t argue.

I thought getting off the beach and into the rippling waves would be a piece of cake, but I was wrong. Dad promised he know what he was doing, but when a punishing wave hit, we were forcefully propelled over six feet high before crashing down…and so my thrilling journey began.

The ocean was vast, and the kayak guide told us to look for sea life below. Sure, I thought, colorful fish, playful seals, little did I know she meant sharks! Leopard sharks come to the cove every summer to feed and I was just above them! “Whoa!” I cried. I knew this was no time for a swim.

I was feeling queasy by the time we reached the caves. We went inside, but my breakfast decided to make an unplanned visit. Still, from my view, I did notice the rock on the ocean floor were really cool, right before I threw up over them. The irritated woman in the kayak next to us kindly asked Dad, “Can your daughter please throw up on the other side of your kayak?”

By the time the never-ending cave tour was done, my unforgiving stomach and I were ready to head back to shore. Captain Dad promised once again he had everything under control. We headed into the surf straight, but a massive wave swelled up behind us. The tour guide calmly shouted to Dad “Just lean back and take it easy”, but it did not register! I’ve never seen Dad’s arms paddle so fast to keep the kayak straight! I’m sure he set a world record that day. Nonetheless, we rolled sideways, and the colossal wave gracefully overtook us. Stinging salt water penetrated my eyes, nose, and mouth. A bulky dark shape passed over me. I don’t know if it was the kayak or Dad. I felt like I was drowning, until the tour guide yelled for me to stand up and I realized I was standing in three feet of water. That was embarrassing! I lost my favorite sweatshirt that day, and Dad lost a shoe. Still, we survived (although I think Dad’s ego was a little crushed) and as we walked wearily back to the beach house, I vowed never to go ocean kayaking again…well, maybe.

The Lost Ticket to the Big Game

It was Ryan Rigby’s birthday. The eight year old lived for baseball. Ryan’s Favorite team was the Boston Red Sox. His dream was to visit Fenway Park and sit in the Green Monster seats. The day of the big game was Red Sox vs. Yankees, the biggest rivalry in baseball.

The morning of the game, Ryan was so excited because it was his birthday and he was going to Fenway Park. Ryan wanted to hold his ticket so that he could be first in the park. Ryan and his family went to the park early so they could buy souvenirs before the game. Leaving the souvenirs shop Ryan realized he no longer had his ticket to enter the ball park. Ryan panicked!

Ryan’s Mom comforted him and told him not to worry. Together we will retrace our steps and see if we can find the ticket. Ryan stood there with his Mookie Betts shirt on, lost and confused. Ryan thought they had to hurry before the game started without him.

First they started back on the subway. The subway is a form of transportation in Boston. Ryan and his family took the subway to Fenway Park. They didn’t find the ticket there. The second place they looked was Quincy Market, where the Rigby family had eaten lunch before heading to Fenway Park. No luck there either. Feeling sad and tired, Ryan told himself he needed to snap out of it, and continue to search. The Port of Boston was the next stop. At the Port of Boston are boat tours of the bay and whale watching. Ryan had went on a boat tour, maybe he left the ticket there. Ryan was lucky enough to see three whales, but still no ticket.

The day seemed long and we needed to get back to Fenway Park before the game started. All hope seemed lost. On the final subway ride back to Fenway Park, Ryan bowed his head and began to cry. The dream of the Freen Monster was going to be gone. Ryan started to wiped away his tears and out of the corner of his eye he spotted something on the subway floor. Could it be? It was! It was the missing ticket. Ryan screamed with joy.

Ryan got to enjoy the best game ever, on his special day. The Red Sox beat the Yankees 8 to 5 that day. Ryan had the adventure of his life.

The Day I Take Home The Gold

I was at the starting gate my heart was racing the flag was raised. On your mark. Get set. Go!

I was practicing for my big day. I kept on thinking. “I have to win or all of it will be over.”

It started getting dark, so my family and I loaded up my dirt bike and headed on our way to the dirtbike race. We stopped at a hotel and went to bed. I couldn’t sleep well that night because I was so excited. In the morning, the birds were chirping and I felt awesome. My mom explained, “Kye is sick so he won’t be able to race.” We got on the road again finally after a long and restless night. I was so nervous, it felt like I had the butterflies dancing in my tummy!

When we got there, we unloaded my dirt bike and headed over to the starting line. I left to my starting gate, my heart was racing. A kid next to me said he’s never lost. The flag was raised. “On your mark. Get set. Go!” I was off and in the lead in front of everybody. Dust was flying in my eyes. Then it was quiet. I was out of the pack. I didn’t think about anything except for winning and taking home the trophy.

Unfortunately, Crash! My bike went flying in the air and I went over the handlebars. My bike landed on me. AHH! I worked my way off the ground and I started my bike my ankle hurt really bad. The kid that said he never lost zoomed passed me. On my way I found that kid crashed in a ditch and hurt. I stopped and helped him to his feet. He said, “This is your chance to beat me. ”

But, I let him ride my dirtbike back and he ended up winning the race and I got his dirt bike out of the ditch and rode to the finish line. I ended up taking last. The kid actually ended up getting a lot of sponsors and making his way to the pros. He gave me the trophy after the race and mumbled. “I couldn’t have done it without you, man.”

Later they found out I just sprained my ankle. I couldn’t walk on it for a while. I put the trophy right by my bed so whenever I wake up I can remember that day.